In the past month, we have recovered the following payments for our customers:

All of these people had the means to pay, and knew they owed the debt.  Each debt was over a year old and each debtor had previously made failed promises to pay. What made them pay them now? Leverage!

There are many factors that can be an incentive for customers to pay you. One of the most powerful tools you may have is leverage. Leverage is the ability to without future product or service until your bill is paid. Not all business owners have the opportunity to use leverage. If you do have leverage use it to help recover delinquent accounts receivables.

Do not believe that using leverage you have is a negative thing. You are not “holding it over their heads”. You are asking them to fulfill their end of the bargain. You would not have provided the product of service or product if you knew that you would not be paid for it.

A classic example of using leverage to get paid comes from the movie Ghostbusters. A snooty hotel manager refuses to pay the exorbitant bill presented to him for the removal of ghosts from his hotel ballroom. 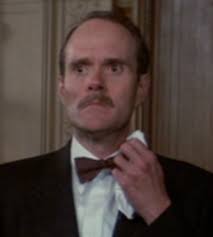 Bill Murray’s character, Dr Peter Venkman, offers to return the ghosts, which, of course would be disastrous for the hotel. Leverage!

Sometimes people give away their leverage, making it more difficult to get paid. Yesterday I received a new business inquiry who had obtained a small claims judgment but had not gotten paid. As we spoke, I learned that the judgment was against his former wife, who lived in the house with him along with their children. He was not willing to change his living situation, and I told him I thought in his current situation he had very little opportunity for payment.

Similarly, too many small business owners continue to provide customers with large outstanding balances product of service. Although in some cases, particularly in the medical field, it is difficult, perhaps impossible to deny service, it is important to set limits. It is important to have a process to know when and how you can and will

I have a new file on my desk today from a contractor who had the perfect opportunity to file a mechanics’ lien against a customer’s property. Mechanics liens must be filed on a timely basis. The time limit to file them varies from state to state but is often 60-90 days after the work is completed. They are a great tool, the property cannot be sold until the debt is paid. However, if a mechanics lien is not filed on time, the right to use it is lost forever. No leverage!

Another collection file I have is for an auto repair shop that let a customer take his car without paying anything. Now, six months later, the customer claims not to have money to pay his bill. I believe that he would have found the money had my customer required payment before they released the vehicle. No leverage!

In some cases you can cut a customer off entirely. In other cases, you may only be able to limit them. Whatever you do, make certain to always require at least some payment. Remember, every time a customer makes a payment, they add to the statute of limitations, the time period you have to legally collect the debt.